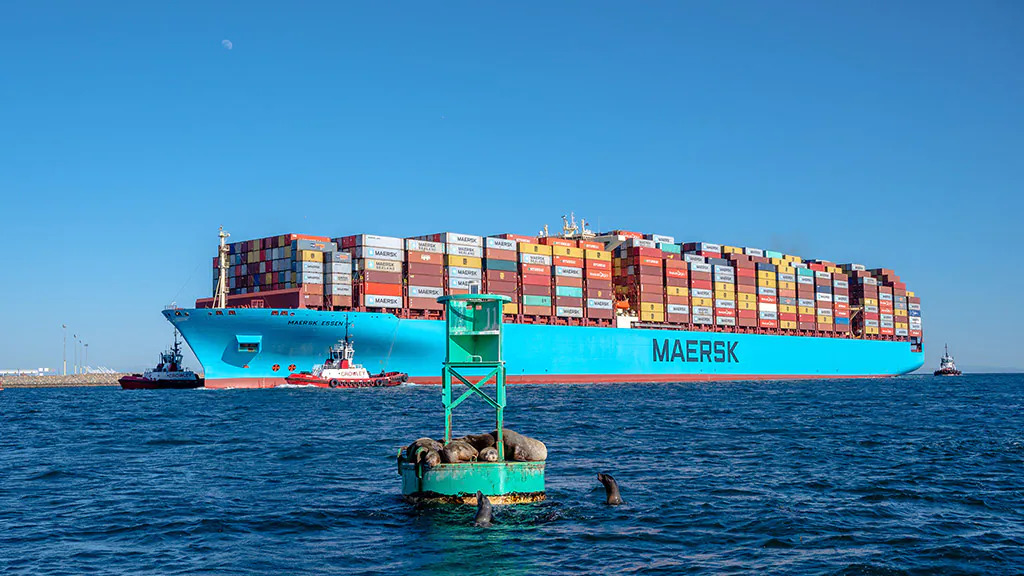 Maersk has warned the supply chain shortage will drag well into the new year – but reported record revenues as a result of spiking demand.

A shortfall in the number of truck drivers, particularly in Britain and the US, has caused bottlenecks at ports with hundreds of container vessels unable to be unloaded, the group said.

“A too large proportion of our capacity is tied up lying waiting outside the ports,” Skou said, referring to 300 container vessels.

There has been a silver lining for the global shipping giant: record freight prices, pushed by the supply chain crisis, have driven Maersk’s strong third-quarter results, which is its most profitable quarter ever.

Maersk, which handles 20 percent of global container shipping, said it had added capacity to manage the soaring demands but that this would still not be enough to balance out the pressures of congestion at ports.

Last month the strain pushed Maersk to direct large vessels away from the UK’s main port in Felixstowe, which handles over a third of the UK’s shipping containers because it was full. The problem is a global one that has also created long queues at US ports in Los Angeles.

The congestion, Skou told the Financial Times, has been getting worse too as retailers have also struggled with rocketing post-Covid demand, referring to the jump from 60 to 80 ships waiting outside ports that Skou observed between his last two visits, about a month apart.

“More longshoremen and most importantly more truckers,” are the most urgently needed, Skou added.

In the meanwhile, retailers have warned consumers to get their Christmas shopping done early this year.

Many shipping containers at Felixstowe were reportedly spending around 10 days at the port before being collected, more than double the average timescale of four-and-a-half days, according to a trade magazine, The Grocer, last month.

In a statement last month though the chief executive of the UK Major Ports Group, Tim Morris, insisted that Christmas was not canceled, though admitted that there could be temporary measures taken and bumps as the industry try to ready itself for the countdown to Christmas, just over 50 days away.

Maersk, which employs around 80,000 people globally, took the opportunity to also announce its acquisition of Senator International, a German freight forwarding company, as the shipping company expands into air cargo.

The business said it plans to add three leased cargo planes to its fleet next year, and two newbuilding Boeing aircraft by 2024.

Architecture Building Construct Construction Green House Interior Smart House
ALL RIGHTS RESERVED © CRC MALTA
We use cookies on our website to give you the most relevant experience by remembering your preferences and repeat visits. By clicking “Accept All”, you consent to the use of ALL the cookies. However, you may visit "Cookie Settings" to provide a controlled consent.
Cookie SettingsAccept All
Manage consent

This website uses cookies to improve your experience while you navigate through the website. Out of these, the cookies that are categorized as necessary are stored on your browser as they are essential for the working of basic functionalities of the website. We also use third-party cookies that help us analyze and understand how you use this website. These cookies will be stored in your browser only with your consent. You also have the option to opt-out of these cookies. But opting out of some of these cookies may affect your browsing experience.
Necessary Always Enabled
Necessary cookies are absolutely essential for the website to function properly. These cookies ensure basic functionalities and security features of the website, anonymously.
Functional
Functional cookies help to perform certain functionalities like sharing the content of the website on social media platforms, collect feedbacks, and other third-party features.
Performance
Performance cookies are used to understand and analyze the key performance indexes of the website which helps in delivering a better user experience for the visitors.
Analytics
Analytical cookies are used to understand how visitors interact with the website. These cookies help provide information on metrics the number of visitors, bounce rate, traffic source, etc.
Advertisement
Advertisement cookies are used to provide visitors with relevant ads and marketing campaigns. These cookies track visitors across websites and collect information to provide customized ads.
Others
Other uncategorized cookies are those that are being analyzed and have not been classified into a category as yet.
SAVE & ACCEPT
'